Skip to main content
It looks like you're using Internet Explorer 11 or older. This website works best with modern browsers such as the latest versions of Chrome, Firefox, Safari, and Edge. If you continue with this browser, you may see unexpected results.

The LAVC Library has many resources that celebrate, reflect upon, or analyze Black and African American heritage. To discover relevant books in our collection, click on the Resources tab above.

Some of the larger colleges in the Los Angeles area -- perhaps some you might be thinking about transferring to -- have excellent online collections of primary research materials related to Black and African American history. To visit those, click on the Resources tab and explore the box called "Beyond LAVC: Digital Collections of Primary Sources."

LAVC's 2019 Black Heritage theme is "Black Scholars Rising." Did you know the LAVC Library provides access to a rich collection of Black scholarly publications, both contemporary and archival? Pictured above are covers from the The Black Scholar journal, which can be accessed through the library database Academic Search Complete (requires a login from off-campus).

Founded in the San Francisco Bay Area in 1969 by Robert Chrisman and Nathan Hare, THE BLACK SCHOLAR (TBS) is the first journal of Black studies and research. In TBS, academics, activists, artists, and political leaders come to grips with basic issues confronting Afro-America, the diaspora, and Africa.

...Partly because of the impact of TBS, Black/Africana Studies and its subdisciplines have become legitimate spaces of scholarly inquiry. However, a paucity of intellectual spaces focused on Black thinking remains. TBS is responding to the Black/Africana Studies revolution and its institutionalization of Black scholarship; the explosion of various forms of racial, ethnic, gender, and sexuality studies; vast changes in immigration patterns; the transformation to global capitalism, the end of Apartheid in South Africa; the election of President Barack Obama; and the burgeoning of a Black middle class alongside the metastasizing of an increasingly criminalized Black underclass. 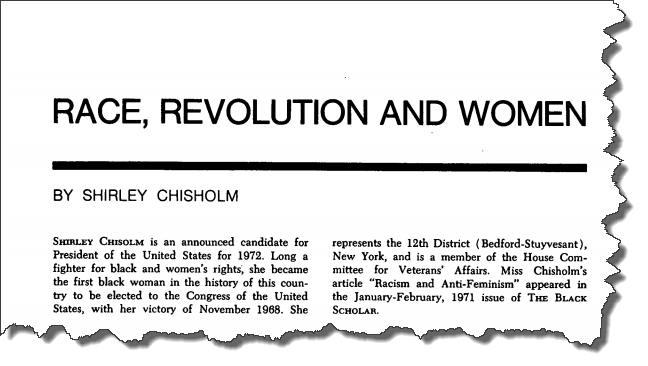 Read the article Race, Revolution, and Women by Shirley Chisolm, from the December 1971 issue of Black Scholar, published during her landmark presidential campaign.

Angela Y. Davis was born on January 26, 1944, in Birmingham, Alabama. An activist and scholar, Davis was appointed a professor in the History of Consciousness Program at the University of California, Santa Cruz, in 1991. She is one of the main architects of a global movement to abolish what she has called the “prison-industrial complex” in the United States and elsewhere in the world. Davis has campaigned against all forms of racism since the mid-1960s, publishing numerous articles and essays in both the popular media and scholarly journals, as well as a half dozen books.

...As scholar, teacher, and activist Davis has inspired generations of students, colleagues, and community activists for more than forty years.

Read the 1992 article Nappy Happy: A Conversation with Ice Cube and Angela Y. Davis, available through JSTOR, which originally appeared in Transition no. 58. 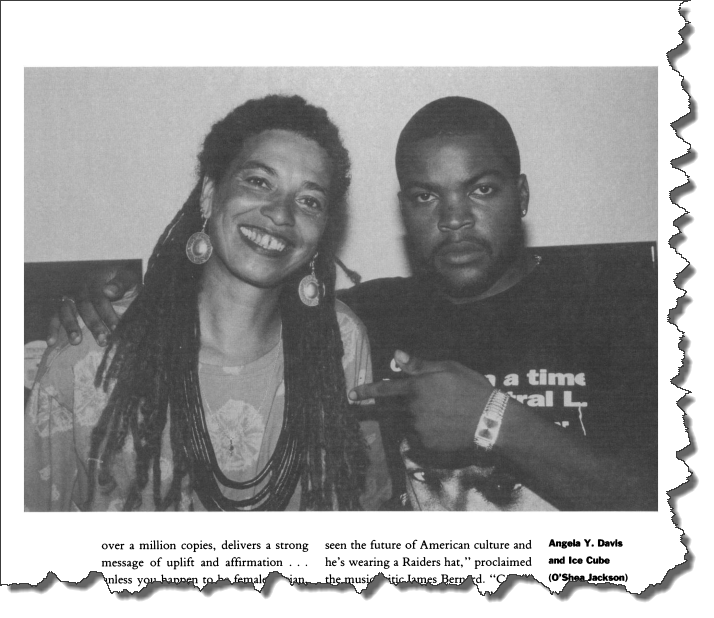 In the News and Around the Web

Students learn names like Martin Luther King Jr., Rosa Parks, and the Little Rock Nine in school, but the fight for social justice and equality is an ongoing battle for Black Americans. With the rise of the internet and social media, movements like Black Lives Matter are shaping the modern civil rights movement and the national conversation on racism, social justice, and discrimination.

Black Lives Matter is an ideological and political intervention in a world where Black lives are systematically and intentionally targeted for demise. It is an affirmation of Black folks’ contributions to this society, our humanity, and our resilience in the face of deadly oppression.

A Herstory of the #BlackLivesMatter Movement by Alicia Garza

The Black Lives Matter movement began in 2013 by Alicia Garza, Patrisse Cullors, and Opal Tometi. What started as a reaction to the death of Trayvon Martin quickly became a driving force in the ongoing fight for social justice. Black Lives Matter, like many civil rights and social justice movements in the 21st century, uses tools like Twitter and other social media outlets to raise awareness on a local, national, and global scale. Anyone with access to social media can engage and participate, which has resulted in a broad and diverse support base. This inclusiveness has the simultaneous effect of discouraging single leaders, instead encouraging everyone to participate and take action.